Once upon a time, in a land far, far away, there lived a beautiful creature with magical powers, called a unicorn. Wouldn’t it be wonderful to be able to believe implicitly in such a story – but, much like we sadly grow out of believing in Father Christmas, realistically we know that unicorns are the stuff of myth and legends. Or are they? Well, no-one’s ever found the fossilized remains of a horse-like type creature with a single horn – though the fossil record for equines is rich indeed. 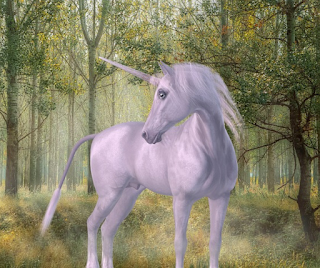 The North Koreans caused a bit of a kerfuffle a few years ago when they reported they’d found the grave and remains of a unicorn ridden by one of their ancient Kings, but the evidence was proved to be spurious. There have even been reported sightings of unicorns over the years. One that caused a particular stir on the internet came from the Ontario Science Center, Canada in 2010 … take a look. So, without physical proof, what else can be done to establish whether unicorns actually ever did/do exist, or are purely a figment of superstitious human imagination (or wishful thinking)?

Unicorns as we know them today are usually depicted as beautiful, long-maned pure white horses with a glittering twisted multi-coloured horn – and sometimes wings. They are magical, shy creatures that live in forests and have healing powers. Legend has it that fleet-footed wild unicorns can only be caught and tamed by sweet and innocent young virgins. This pretty picture of unicorns is no doubt what makes them so attractive to young girls; hands up who’s daughter has a pair of unicorn slippers, unicorns printed on her bedroom curtains, or a fluffy unicorn cuddly toy! Unicorns are all the rage, and not for the first time – but in the past they weren’t quite so pink and sparkly. 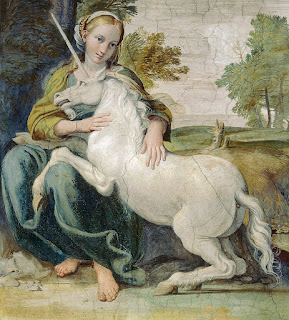 REAL LIVING CREATURES
What’s interesting is that one of the earliest literary mentions of unicorns comes in the writings of the ancient Greek physician Ctesias in a sort of natural history treatise he wrote about India in around 400 BC. Clearly he believed unicorns to be real living creatures, although he never actually saw one. Ctesias visited the Persian imperial court where he interviewed travellers who described the Indian unicorns to him, and he recorded their words. To sum up, the creatures were said to be wild asses as large as horses, with white bodies, dark red head, blue eyes and a red white and black pointed horn protruding from the forehead. Aristotle mentioned unicorns as well, although he equated them to an oryx. Classical Romans got in on the act too – even Caesar wrote about a stag shaped like an ox with a single horn growing between its ears. In the third century Roman historian Aelian described another unicorn creature with feet like an elephant and the tail of a goat – a rhinoceros perhaps? And so different conceptions of a one-horned ass/horse/antelope/goat creature spread around the world until in the Middle Ages the unicorn made it into the Bible – although this is now put down to a mistranslation from the Hebrew.

MARVELLOUS HEALING PROPERTIES
By the medieval times unicorn horn had come to be regarded as a cure for poisoning and disease, and an aphrodisiac.

Most of the horns sold here in the UK and Europe were the tusks of the narwhal whale, which grows a long spiralled tooth projecting from its head, much sought after by a gullible public. The marvellous healing properties attributed to unicorns had them being taken on across Europe as symbols to designate a pharmacy. At this time most people were in no doubt that unicorns really did exist – probably in India or some other remote eastern realm – and adventurous hunters were bringing the magical horns back to Europe. In medieval society and even beyond they were written and spoken of as real creatures. The unicorn gradually became enshrined in folklore and folk tales, and featured in much Renaissance art – eventually finding its way onto the Royal Coat of Arms of the British monarch. Even today the elusive animal wanders through pages of fantasy literature, continuing to charm us as he exudes his qualities of peace and power, wit and whimsy, nobility and courage.

So – do YOU believe in unicorns? Perhaps Lewis Carroll had it right when he had his famous character Alice meet a unicorn in Through the Looking Glass. The creature told her: “If you believe in me, I’ll believe in you. Is that a bargain?”