These are the words inscribed on the Animals in War Memorial at Hyde Park in London.
This is certainly a true statement for the more than eight million horses and countless mules and donkeys that died during the First World War on both sides of the conflict – either felled in battle, or succumbing to exhaustion, starvation, and disease.

One has to wonder where all these unfortunate equines came from – after all, at the start of the war in 1914 the British army apparently possessed only 25,000. Since the Calvary was a vital force when the war got underway, and horses were also required for logistical support as beasts of burden to ferry guns, ammunition, ambulances and supplies, the War Office set to work to requisition as many as possible.

The British countryside was gradually denuded of horses of all breeds, from heavy drafts to hunters and eventually even children's ponies – all sent across the Channel to face the horror of war. 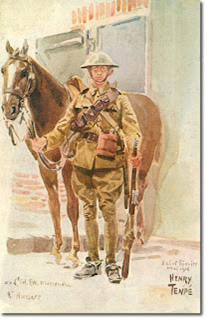 Heavy equine losses became appallingly routine and the demand for replacement animals was great throughout the war. Horses were shipped in from New Zealand, Australia, South Africa, Canada, India, Spain and Portugal, and many thousands of horses and mules were bought from the USA (some of them wild straight from the American plains), bound for the Western Front.

Feeding and caring for hundreds of thousands of horses on the front was a logistical nightmare. If you’ve got one horse, imagine the requirements for thousands in the muddy, cold, violent conditions of the battlefields!

The official rations for British horses were 12 pounds of oats, 10 pounds of hay and some bran every week. Many didn’t receive their share, and were constantly hungry, out in the open in the cold and wet, suffering with lice and mange, skin disease, and respiratory disorders.

The Royal Army Veterinarian Corps did what it could, and there is little doubt that the soldiers and their four-footed comrades shared a close and caring bond.For many horribly injured or diseased war horses sadly the only treatment was euthanasia.

The British Army Veterinary Corps hospitals treated 725,216 horses over the course of the war, successfully healing 529,064. Sadly, many of those that survived did not make it home at the end of the war, when the priority was repatriating men rather than animals. A great deal were sold to local slaughterhouses or residents; many of the aged and infirm were simply shot; while others were sent off to serve in the British Army in India and Egypt.

Today, more than 100 years after the end of the First World War, we still commemorate the sacrifice made by so many serving soldiers, civilians and, especially, horses. Turns out it wasn’t the “war to end all wars” as was hoped at the time, but it was, thankfully, the last time that horses were used so cruelly in such large numbers to fight man’s battles.

We’d like to share with you this heartbreaking poem, written by Henry Chappell, believed to have been inspired by the famous painting, “Goodbye Old Man”, painted by Fortunino Matania for the Blue Cross Fund in 1916.

Only a dying horse! Pull off the gear,

And slip the needless bit from frothing jaws.

Drag it aside there, leave the roadway clear –

The battery thunders on with scarce a pause.

Prone by the shell-swept highway there it lies

With quivering limbs, as fast the life tide fails,

That mutely plead for aid where none avails.

Onward the battery roll, but one there speeds,

Back to the wounded friend who lonely bleeds

Beside the stony highway where it fell.

Only a dying horse!

Lifts the limp head and hears the shivering sigh

Kisses his friend, while down his cheek there steals Sweet pity’s tear;

No honours wait him, Medal, Badge or Star

Though scarce could war a kindlier deed unfold,

He bears within his breast; more precious far

Beyond the gift of kings, a heart of gold. 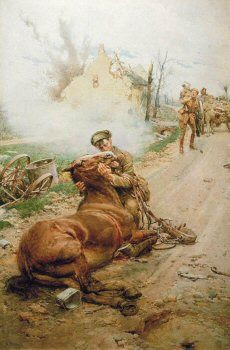